Resident of Bishkek Venera Kyzalakova demands a fair trial and is ready to die by her own hand. She told 24.kg news agency.

According to her, she has already appealed to the Chairman of the Supreme Court and the Prosecutor General with a demand for an impartial and fair hearing of her case. However, she remained unheard. This time, the woman asks the President Sooronbai Jeenbekov to stop the judicial lawlessness.

«My sister and I will hold a single-person picket at the White House. Our protests near the courthouse did not give a result. If they continue to ignore us, we are ready for suicide,» said Venera Kyzalakova. 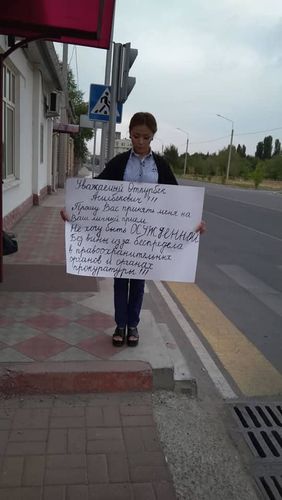 Former husband of Venera Kyzalakova, Bakyt Kuruluev, registered his sister Ainura as owner of non-residential premises, where he later opened a store. But during the divorce, he said that it was she, Venera, who forged the signatures, registered her relative as owner of the market outlet without the consent of her husband. A criminal case has been opened against Kyzalakova under the article «Fraud.» The defendant claims that the investigation is conducted one-sidedly and with an accusatory bias.

15 new coronavirus cases reported in Kyrgyzstan, 1,365 in total
News brief
26 May, Tuesday
12:04
Number of infected with coronavirus close to 5.5 million people globally Number of infected with coronavirus close to 5.5 millio...
11:53
Railway routes for return of migrants to homeland not provided
11:39
Seven more medical workers contract coronavirus in Kyrgyzstan
10:29
35 new COVID-19 cases registered in Kyrgyzstan, 1,468 in total
10:21
23 more people recover from coronavirus in Kyrgyzstan
10:08
Fled six years ago sister of Sadyr Japarov detained in Poland
09:41
Lawyer: It is unlawful to demand financial reporting from NGOs
09:16
Citizens of Kyrgyzstan to be tested for coronavirus in Yuzhno-Sakhalinsk
25 May, Monday
15:45
Flight from Bishkek to Moscow, St. Petersburg scheduled for May 26
15:38
About 1 mln soms in fines written out for non-compliance with sanitary standards