The former head of the 9th Service of the State Committee for National Security of Kyrgyzstan, Damir Musakeev, was summoned to the Military Prosecutor’s Office for questioning. The Deputy Chairwoman of SDPK Kunduz Zholdubaeva told. 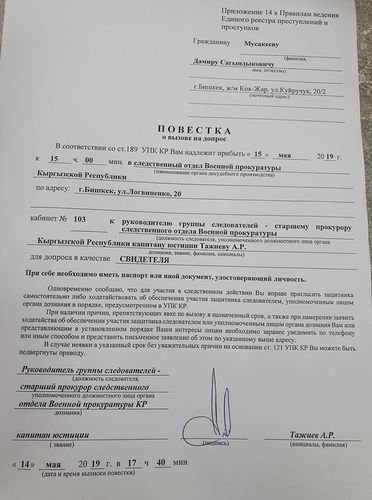 According to her, he received a subpoena today, which states that he should appear at 15.00 as a witness.

The Military Prosecutor’s Office opened a criminal case on illegal enrichment. It concerns the real estate of the former head of the 9th Service of SCNS Damir Musakeev. According to investigators, from 2010 to 2017 he had purchased housing for 20 million soms.

Damir Musakeev is accused of abuse of official position. According to the investigators, he, being the head of the 9th Service of the SCNS from 2016 to 2017, illegally distributed office apartments among close to him employees.