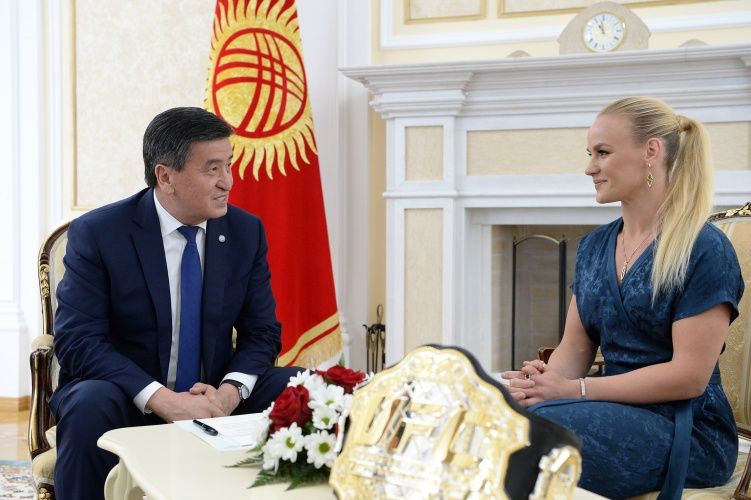 According to the press service, her coach Pavel Fedotov, President of the World Kulatuu Ertaimash MMA Federation Ruslan Kydyrmyshev and the mother of Valentina Shevchenko — Elena Shevchenko — also took part in the meeting.

The head of state warmly greeted the guests, congratulated Valentina on the victory and winning the women’s lightweight championship belt.

Related news
Valentina Shevchenko awarded Dank Order
The President expressed his gratitude to the coach Pavel Fedotov for the highest level of skills in training of athletes, perseverance, coaching talent and unshakable faith in his trainees.

He specially thanked Elena Shevchenko, who granted Kyrgyzstan the multiple-time world champion and through her support, love and faith, paved the way to the victories in the world of sports.

«The whole country, hundreds of thousands of our citizens, are tirelessly watching your sporting successes and fervently support you. Medals that you have won in a fair and stiff fight have a special value for our entire multinational country. This is a result of many years of work. You have coped with the task, defended the honor of our Kyrgyzstan. We are sure that in the future you will achieve even greater results and show the world brilliant achievements in sports!» stressed Sooronbai Jeenbekov.

Valentina Shevchenko thanked Sooronbai Jeenbekov and all the Kyrgyz people for their support and warm welcome, noting that, wherever she is, she always feels the warm support of her compatriots, who give her strength and confidence in victory.

The President invited Valentina Shevchenko to come annually to Issyk-Kul for training, wishing further success in her sports career, good health, and well-being.

The head of state awarded Valentina Shevchenko with Dank Order.

The guests handed over to the head of state symbolic gifts, on one of which — the glove — Sooronbai Jeenbekov autographed.