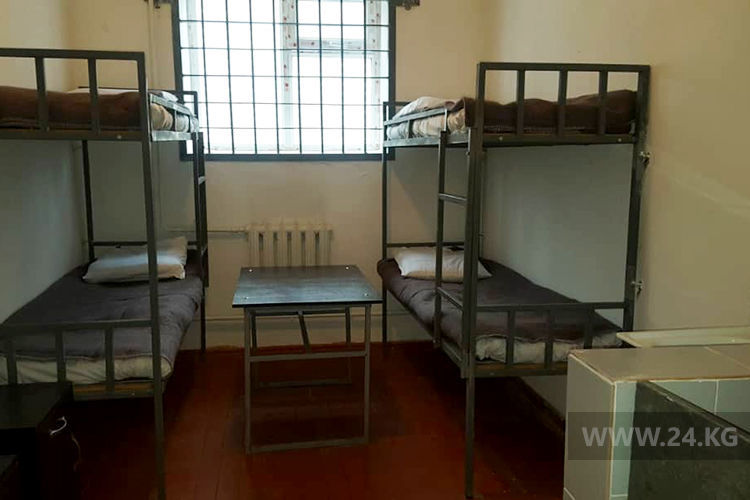 A separate cell block for those convicted of terrorism and extremism was opened at prison 27 in Zhany-Zher village of Chui region.

The building is designed for 180 people. The state allocated 33,928 million soms for the construction and equipping of the block.

More than 600 people have been convicted of extremism and terrorism in the republic. For several years, four people have officially abandoned their ideas.

According to the Chairman of the State Penitentiary Service, Taalaibek Zhaparov, according to the law, those convicted of terrorism and extremism must be kept in separate cells. However, the cell block for such people was built at the expense of the state budget for the first time.

«We are building the same block at the prison located in Belovodskoye village. Convicted of terrorism and extremism people must be kept in the cells. Sick prisoners of this category are also kept separately in the prison 47. The analysis showed that the contingent of this category represents a certain danger,» the head of the service told.

Keeping of people convicted of terrorism and extremism in the separate cell block will improve the prevention of recruitment in prisons.

«The prisoners go for a walk, go in for sports — there are tables for table tennis in the exercise yard. In 2018, in this prison, we equipped two cells with production machines. The convicts learn handicrafts and receive certificates,» said Taalaibek Zhaparov.

The Deputy Chairman of the State Penitentiary Service Myrzabek Adylbekov told that the new block met all the required standards.

Exterior doors are made of iron with a thickness of 10 centimeters. The doors have signs with the data of the convicts.

Internal doors do not fully open, it is necessary for the safety of employees. Cameras are designed for three and four beds.

Those convicted of terrorism and extremism are already being transferred to the new block. There are about 100 people in the new building.

Prisoner Alymbek Nadyrbekov (name changed) has been in prison for almost five years. He was sentenced to 16 years.

«I am from Aksy. My brother is in Syria now. I am convicted for contacting ISIL. In 2015, I was supposed to help commit terrorist attacks in Bishkek,» he told.

I had to find an apartment for those who wanted to blow up the U.S. embassy in Bishkek. I contacted these people via WhatsApp.

The man is 38 years old now, he regrets his deed and advises no one else to get involved in ISIL activities.

«Almost five years have passed, and I don’t know if my brother is alive or not. I have a wife and four children. I do not advise anyone to get involved in extremist groups. It’s better for people to practice traditional Islam,» the convict says.

42-year-old Altynbek Samaev was sentenced to 23 years, but he does not admit his guilt.

«I was convicted for participating in Jaish Al Mahdi group in 2010. I was accused of staging a terrorist attack at the Sports Palace in 2010. I told everything in court, but I was convicted. I did not do this, but I was really familiar with the people from this group,» he said.

Sooronbai Jeenbekov expresses condolences to President of Pakistan
News brief
26 May, Tuesday
18:21
At least 393 citizens return to Kyrgyzstan from Moscow At least 393 citizens return to Kyrgyzstan from Moscow...
17:58
Planned immunization resumed in Kyrgyzstan
17:42
At least 717 people get measles in Kyrgyzstan since beginning of 2020
17:30
Medicine used in treatment of coronavirus produced in Kyrgyzstan
17:00
Campaign for issue of passports to prisoners resumed in Kyrgyzstan
16:15
Two more COVID-19 cases detected at Children's Department of Oncology Center
15:48
Parliament of Kyrgyzstan has new deputy
15:34
Graduates of Kyrgyz schools to be able to enter universities remotely
15:11
COVID confirmed in patient of Maxillofacial Surgery Department after discharge
13:52
Motorcyclist killed in collision with two cars in Bishkek