Rescue breathing for Bishkek. Will officials clear the air in the capital? 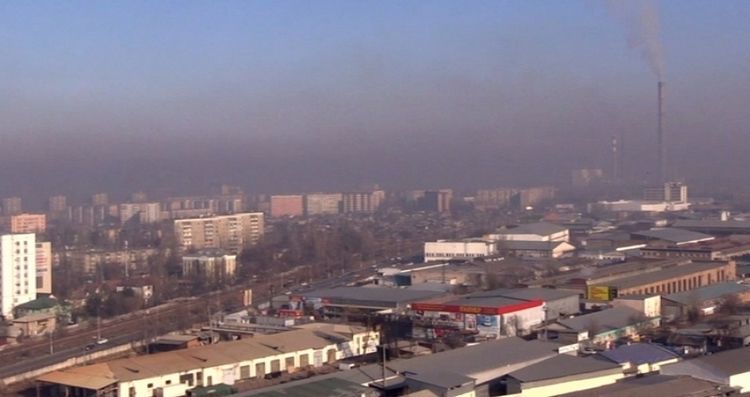 Just the other day, the author of these words was nearly fined for smoking in a park. As it turned out, it is forbidden to smoke in certain locations of Bishkek. In such a way the city is trying to protect non-smokers. Hence, it could be good for the residents and guests of the capital, if it was not for the paradox of the situation.

The lungs of a non-smoking inhabitant of a million city are not much cleaner than those of a nicotine addict. So, at least, experts of the global scientific community say based on research in many cities around the world. In the case of Bishkek, apparently, they are definitely not mistaken.

The thick and suffocating smog over the Kyrgyz capital has long been embarrassing to foreign guests. It would seem that the city is located in a valley near the majestic and clean mountains, and if you drive a little further south from the capital, you will practically stop noticing the traces of civilization in a short time. If, of course, you do not look back to the black dome of smoke under which one of then the greenest cities of the USSR hides, and now taking one of the leading positions in the region in the number of premature death facts.

According to the World Health Organization, heart diseases, strokes, pulmonary diseases and related cancer, acute respiratory infections are widespread in Kyrgyzstan. The symptoms of these ailments are often found in children.

According to WHO estimates, the republic firmly takes the second place in Central Asia in premature mortality rate!

Doctors explain the statistics by the situation in Bishkek, where the level of, for example, pulmonary diseases is two times higher than the national average. Moreover, it is growing rapidly.

Can we still breathe this air?

The World Health Organization claims that the cause of diseases leading to premature mortality in the Kyrgyz Republic, exactly in Bishkek, is most often ... the air! Or, more precisely, that asphyxiating mixture, which the city residents breathe.

The level of concentration of hazardous substances in the atmosphere of the capital exceeds WHO standards ten or more times.

However, the officials who, in theory, should be responsible for the environment, are not aware of this. According to UNDP, state agencies have not taken measurements since the 1990s; they do not have such experience and equipment. Universities and non-governmental organizations do this work instead of them.

Thanks to enthusiasts from the Kyrgyz-Russian Slavic University and the local MoveGreen NGO, the citizens learned that the level of air pollution in Bishkek last winter broke Beijing’s sad record. But after all, the volume of harmful substances in the atmosphere of the China’s capital exceeds the permissible concentration more than twenty times!

It is time to talk about real ecocide. But who is to blame?

Why did the poisonous and deadly cloud appear and hang over the largest city of Kyrgyzstan?

Large industrial enterprises, which have caused significant damage to the environment, have long been stopped in the republic, like in Bishkek city. It was done not at the insistence of environmentalists, but due to the collapse of the Soviet Union. In the sovereign period, the smoking pipes of the enterprises were replaced with the cars, chimneys and burning landfills.

The Bishkek Heating and Power Plant also contributes to the situation; the smoke from it is being spread throughout the capital which from time to time drops out in the form of toxic soot near the object.

There is another important factor: the chaotic development of Bishkek, which disrupted the natural circulation of air over the city.

What about our officials? Surprisingly, but until recently, the State Agency for Environmental Protection and Forestry continued to repeat that «the level of air pollution in Bishkek was within acceptable limits.»

You heard right. As the state agency recently stated, seven posts have been set up in Bishkek where sampling and analysis of the content of harmful substances in the atmosphere was carried out, background concentrations in each area of ​​the city were compared, and there were, allegedly, no grounds for concern.

«There were no cases of high and extremely high air pollution,» state environmentalists said. «According to the data of an automatic station for monitoring of the atmospheric air pollution, the content of carbon monoxide, sulfur dioxide, oxide and nitrogen dioxide in the atmosphere is within acceptable limits.»

Bishkek residents do not believe such statements, and not without reason, because the statements of the state agency do not help breathe easier.

Fortunately, high-ranking officials began to show a healthy skepticism. The Prime Minister of Kyrgyzstan Mukhammedkaly Abylgaziev just a couple of weeks ago said that the situation was alarming and it was time for the authorities to take a number of measures, including helping the households with switching to gas heating, switching public transport to gas fuel and landscaping of the city.

The head of government proposed to conduct research on the impact of new high-rise buildings on air quality in the capital. But, it is thought, the lobby of construction companies will lead to the fact that scientific research will not find a cause-effect link between high-rise buildings and the lack of a fresh breeze from the mountains.

There is money for ecology

What we have to do? Logic and scientists suggest: no matter how the relevant state agency refuses, it is time to reduce harmful emissions into the atmosphere in Bishkek. And it must be done not through fabulous projects like replacing of used vehicles with modern electric cars (even Mask is not able to do it), but quite real ones.

For example, the authorities can engage in waste management, installation of filters on pipes of Bishkek HPP, control the traffic in the capital and the quality of fuel, and other environmental initiatives. Moreover, it is quite possible to find funds for such a thing. Moreover, it is real.

Today, in fact, about $ 50 million could be put in the treasury of state environmental services.

This amount, at least, Centerra company pledged to allocate to the Nature Protection Fund based on the 2017 agreement on Kumtor project, if, of course, the Cabinet does not intend to once again change the rules of the game with the investor. The sum is huge judging by local standards. Well, how else? Kumtor is a national project. So why cannot it serve another, not smaller purpose?

Another issue is how to make the officials spend these funds on the intended purpose. Alas, the reorientation of state structures to real work is needed for the success of an environmental campaign.

Now, apparently, the officials of the environment sector are more inclined to paper work.

They have learned very well how to «engage in monitoring,» which does not reveal air pollution, drawing up beautiful but impracticable projects for international conferences, raising of funds for re-equipping environmental services, which, however, most often involves updating of the fleet or renovation of departmental premises. It’s time to transfer officials to a higher class, more responsible one.

How? Believe me, we should not reinvent the wheel. Other states have learned long ago to control the work of officials. Are we worse? We can, for example, oblige the environmental department to conduct a public examination of all projects supported by the fund. The money is national. It may be worthwhile to involve representatives of investors in the examination. The latter are able to count money and are unlikely to allow spending the allocated funds on rearrangement of sheets of paper.

The Nature Protection Fund can and should work for the country and solve its real problems. Otherwise, why is it needed at all?