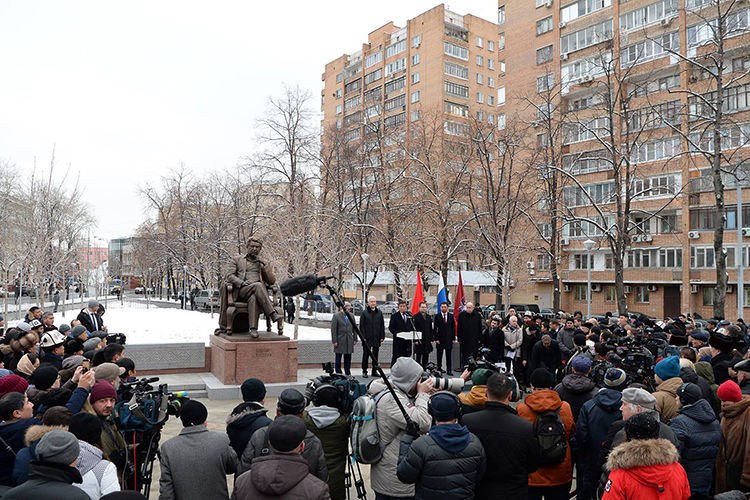 A monument to Chingiz Aitmatov was opened in Moscow. The Information Policy Department of the Presidential Administration of Kyrgyzstan reported.

The solemn ceremony was attended by the head of Kyrgyzstan Sooronbai Jeenbekov, Moscow Mayor Sergey Sobyanin, Minister of Culture of Russia Vladimir Medinsky, Special Representative of the President of Russia for International Cultural Cooperation Mikhail Shvydkoy.

«Today we have once again been convinced that people not only in Kyrgyzstan, but also in Russia have great respect for the memory and work of Chingiz Aitmatov. This is a classic author of not only the Kyrgyz, but also Russian literature. He became a prominent representative in the world of both Kyrgyz and Russian culture. He said that «two languages, Kyrgyz and Russian, are his two wings,» noted Sooronbai Jeenbekov.

According to UNESCO, Chingiz Aitmatov is the most widely read writer in the world after Shakespeare and Tolstoy. His books were translated into 176 languages ​​and published in a circulation of 100 million copies.

The author of the monument to Chingiz Aitmatov in Moscow is Azamat Abdrakhmanov, the architect from the Russian side is Sergey Pavlov. The sculpture is cast in bronze. Its height without pedestal is 2.7 meters. The monument was installed in the park named after Chingiz Aitmatov in Danilovsky district of Moscow at the intersection of Pavlovskaya Street and Podolskoye highway.