A rally is being held in Bishkek. Its participants demand to fire the investigator of the Bishkek Police Department Omotkaliy Zhenishbekov. 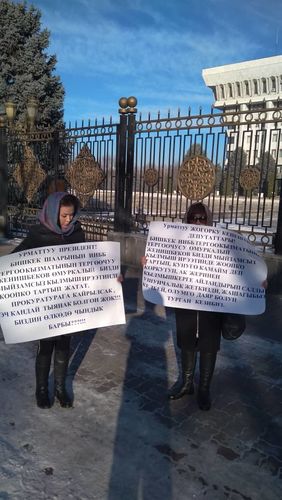 According to them, the police officer, summoning for questioning, makes people confess and threatens. Protesters threaten with self-immolation if measures are not taken.

Note, the last case has been registered recently. The defendant, Khatamzhan Kalandarov, a defendant in the criminal case on fraud, complained to the lawyer that Omotkaliy Zhenishbekov had cursed at him and forced to change his testimony.

Representatives of the defense appealed to the Bishkek Prosecutor’s Office with a statement about bringing Omotkaliy Zhenishbekov to criminal liability for torture.

The Bishkek Police Department conducted an internal investigation and asserted that Omotkaliy Zhenishbekov did not threaten anyone, he did not conduct interrogations without a lawyer, and the information of Khatamzhan Kalandarov was unreliable.