According to her, nine sensors were installed in different parts of the city to obtain data on the concentration of solid particles.

«I watched the level at night, the picture was different all over the city. One sensor, for example, is located in Panfilov Park area, there is an excess there, as well as at the intersection of Kievskaya and Tynystanov Streets. The highest one-time excess of the norm is observed not in the center of the capital, but in the newly built quarters. A sensor showed 846 points in Ak-Orgo today at 3.00 am. In Kazakhstan, Belarus and Russia, the maximum allowable one-time limits range from 150 to 300. And we have up to 860! According to our data, the cleanest microdistrict of the capital is the 7th,» said Maria Kolesnikova. 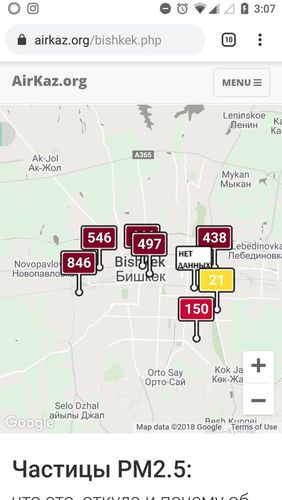 Deterioration of the indicators is caused by several reasons. First, it is connected with the heating season. «People heat their houses mainly by coal, possibly rubber, as well as garbage from garment industry. We saw a huge collection of such waste in the newly built quarters. In addition, there is a traffic collapse in the city. Cars emit more exhaust gases in traffic jams. There are also private saunas. All these factors plus weather conditions have led to the formation of smog over the city,» the head of the association said.